"The Paris to Hayling Charity Cycle Ride made a popular return to the beautiful town of Versailles using the same route as for the 30th ride in 2015. Readers will not be shocked to hear that it was hot, very hot! We have probably had isolated days which were hotter but I don’t recall a ride when over the full route participants were so thoroughly baked. And never in our ride’s history have I heard cyclists requesting that we organise some rain!

"As always Day 1, straight off the ferry with limited sleep, proved a particular challenge. It was also probably the hottest day but all finished the 86 miles to Evreux. Then it was on to Versailles where, on arrival, most riders lingered in the beautiful grounds of Louis XIV’s somewhat excessive abode. On Day 3 we pedalled and sweated our way to Rouen. Much of this route had been used many times going right back the second ride in 1987. It’s a great day in the saddle with one highlight being a stop in the lovely riverside village of Muids. This has been the scene of many memorable Paris to Hayling moments where, as on so many previous occasions, we were heartily welcomed by Jeanette Koleno owner of Café De La Poste. Twenty odd miles later we were in Rouen. Even after more than 30 visits I have never failed to be impressed by this city with its quaint medieval quarter and of course a splendid cathedral!

"We always have a fantastic downhill run into Rouen but equally we have always expected some nasty payback on the following morning since, whichever way you leave the city, you need to climb a very steep hill. And indeed on the morning of Day 4 we were not disappointed. Soon we were duly puffing and swearing and creaking (well in my case at least) our way up an incline that felt that like might been personally designed by the Marquis de Sade. We headed north to the channel coast before turning west to Le Havre. On arrival here stopping at one its many beach bars was an excellent way to finish another hot day’s cycling. The following morning we had the challenge of cycling over the Pont De Normandie, many riders and support team members being in fancy dress. There are only a dozen or so bridges in the world which are longer than this one and I am not sure any of those feature a steep gradient cycle lane running alongside a motorway! It was as always an interesting experience! Once this little hurdle was cleared it was time to relax as we cycled along the coast of this particularly delightful part of France through Deuville, Villers and other posh resorts that lay en-route to out official finish at the famous Café Gondrée at Pegasus Bridge. The proprietor Arlette Gondrée (who was a young girl living above the café when it became the first building liberated in 1944) was there to welcome us. She has been a friend of our ride for many years and kindly donated two bottles of Café Gondrée’s champagne which were auctioned to good effect later that day.

"Riders celebrated in Caen that evening and awards were duly presented. We all reflected on a yet another success and looked forward to our 34th event!" 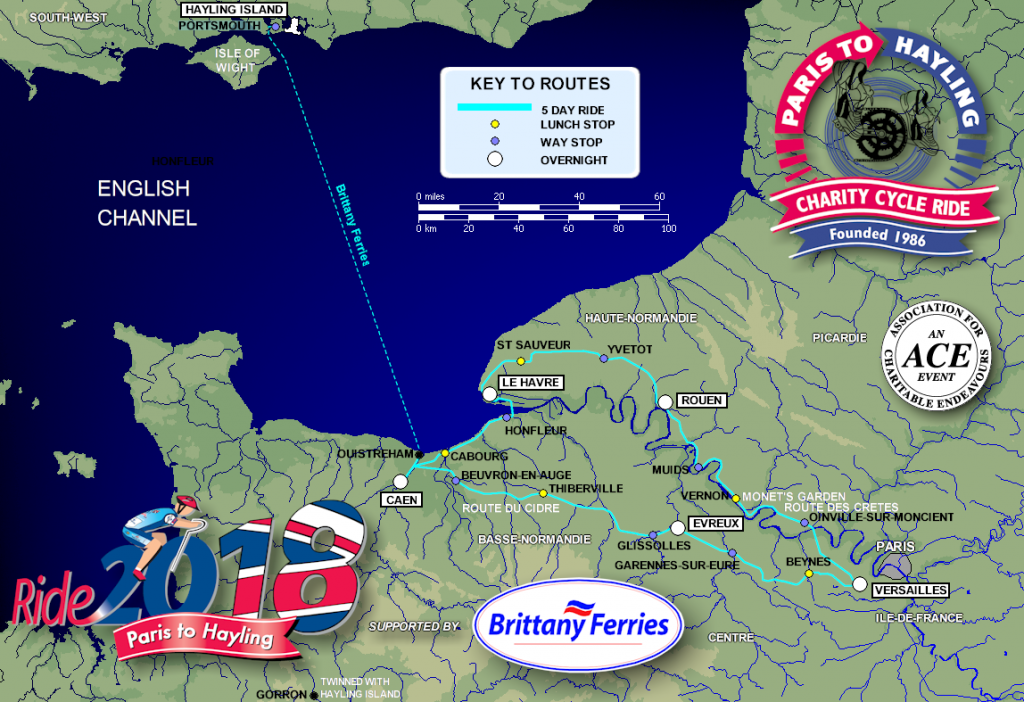