The 29th year of the annual Hayling Cycle Ride which has established a substantial track record, in the world of cycling, charitable fundraising and not least friendship, camaraderie and a unique spirit.

THE BEST RIDE EVER ?

It has been said before but many veteran riders did seriously wonder if this year’s event was possibly the best ride ever. It was probably the hottest, with temperatures on the open road exceeding 40 Centigrade at one time and it was certainly the best supported with Jo Macey and her team doing a great job dealing with a couple of accidents and in general the extra demand placed upon them by the heatwave conditions (excessive water consumption , tired riders etc).

We were of course back in Paris for our 29th event and I think the return proved popular with all riders. The weather showed off the spectacular countryside to good effect even if it did make some of the longer days (two were over 90 miles) and the occasional tough hill all the more challenging. Riders were delighted to revisit Au Joyeux Normand in Grandchain for our Day 1 lunch. There has been a change of ownership during our 7 years absence but the quality and quantity of the lunch was first class. For many there was also a nostalgic return to Muids where we received our traditional warm welcome from Jeanette at the Bar De La Poste. In this delightful village many chose to refresh themselves with a quick dip in the Seine. We officially finished the ride at the Pegasus Bridge Café the scene of many previous finishes. Those who had not been there before seemed much moved by this historic venue which as the first house liberated in the D Day Landing is both a bar and museum dedicated to the brave people who liberated France.

Party night in Caen was a great success with local Ska band Bigtopp fresh from their success at the Isle Of Wight Festival, providing the superb entertainment. Two of the band were ex-Paris to Hayling Riders and most are ex-Ditcham Park School pupils , an establishment with which the ride has had close and successful connections for some years.

On the return ferry we had the traditional prize giving , with a number of Islanders being rightly recognised for their efforts. These included Sheila Tidd , a veteran of many rides who was judged the most improved rider. This was despite tough competition from fellow Hayling resident Sue Loveridge who was a past winner of this award but has now improved so much again that she nearly won it for a second time ! Another Islander Nicki Howard Smith won the award for best newcomer and yet only a few months ago she was a total novice to long distance cycling! And West Town Hairdresser Nicki Anderson and her 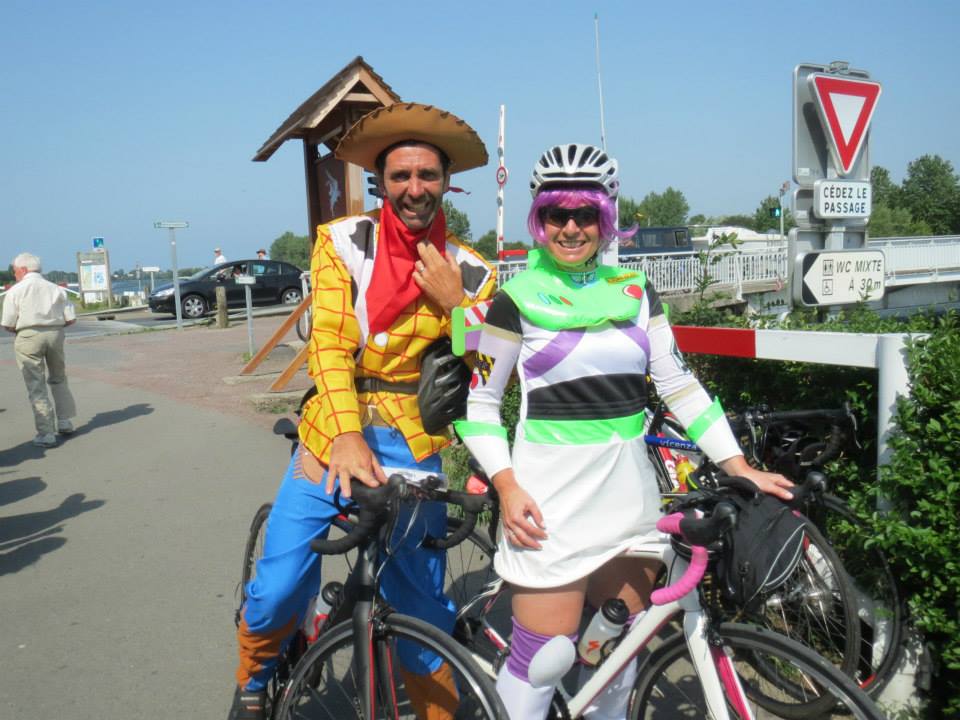 husband Peter won the fancy dress award for their Buzz Light Year and Woody. Jo Macey who runs the Wedge Care Home in Park Road was awarded the Judy Dyer Support Trophy on behalf of all her splendid team since it was decided that this year with such a strong all round performance it was just impossible to single any out individuals. The Committee Member Award went to well know resident Rod Elliott who whilst not technically a committee member has been co-opted so many times to assist that he deserves to be treated as one. And finally we recognised Andy Henderson chairman of Cycle Hayling who has done some fantastic work in upgrading our web site

Our return to Hayling mercifully avoided the predicated thunderstorms . We were pleased to finish at The Lifeboat pub and our thanks to Sid, Hayley and all whole helped with this final part of our happy week.

It was with some emotion that I had talked at our prize giving about planning the 30th ride. Clearly I never thought it would come to this! However backed by a fantastic committee planning has already started and I am confident that the 2015 will be another successful event. Please check our web site for details of how to enter. Dates are likely to be Sunday 12th to Saturday 18th July and all the indications are that it will be a sell out!