Both Hayling and Holland are flat but despite the fine efforts of Cycle Hayling (which is improving things significantly) the cycling in Holland is somewhat easier than on our Island. It seems that all main roads have a cycle path running parallel and cyclists (this takes some getting used to) have right of way over motorists . If you add to that the charms of its towns and cities and the friendliness of the people and a practically ubiquitous command of English, Holland makes an excellent location for a week’s cycling. The 2013 Hayling to Holland cycle ride was the second such trip but while last year’s event was a success the velocopedal attractions of the country were rather marred by the appalling weather, literally damping spirits and giving us a couple of cases of near hyperthermia ! However this year’s event was quite different. The first two days, from Hook of Holland to Haarlem and then on to Amsterdam, featured glorious weather and while the remainder were a little less tropical than the heat wave we are experiencing as I write this, they were positively balmy compared with 2012.

It was great to see some old faces returning after a few years absence as well as the continued participation of many Hayling Cycle ride “recidivists”. But equally it was delightful that 40% of riders were newcomers travelling from as far away as Portugal and the United States. This demonstrates that even at a time when “foreign destination” charity rides like ours are common, there is still strong interest in what we believe was the original such event. 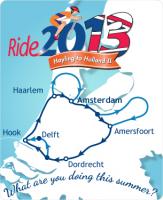 Among my favourite ride features were cycling along a cycle path through sand dunes on Day 1, the stopover in Amsterdam on Day 2 and lunch in Delft on Day 5. Others will have different preferences but judging by the feedback all seemed to enjoy the week and the camaraderie which has made this event so special for so long. As one ride veteran commented...” everyone who took part will have made new friends”. Paul Clutterbuck author of “Inside Amsterdam” the Dutch capital’s definitive bar guide again provided us with a personal and highly informative tour of some of the city’s most historic hostelries. He also managed to have Rod Elliott and I thrown out of a nunnery - surely a Bike Ride first, even if it was due to a totally innocent misunderstanding.

In order to provide support on cycle paths which were out of reach of traditional support vehicles we introduced two light mopeds or as the Dutch call them “snorfiets”. These were able to follow us on almost all the paths and most of the ferries. The latter were a feature two of the days cycling and a reminder that you are never from water in Holland. The mopeds were sponsored by the software company QlikTech. We were also very grateful for the continued support of WKB and P&P for their supply if support vans.

We had our traditional prize giving on the return ferry. The Meryl Browne Trophy (“Proof That You Can”) was won by Martin Lewis who took part in the ride with a wired jaw! The Eberhardt Signs Trophy for the most improved rider was awarded to Nina Burrowes and The McQuade Cup for the most impressive newcomer went to Mark Durkin. James Jenkins was chosen as Young Rider of the Year although as always there were very many impressive rides by Ditcham Park School members. Fun and amusement are key ride ingredients and the Value Add Trophy was deservedly won by popular rider Bilbo Vaughan whose antics included proving not for the first time, that he is unlikely ever to win Strictly come Dancing! There were a number of entertaining fancy dress outfits on the last day but the unanimous verdict was that deserved winners were the Waltham Wobblers and their Bumble Bee outfits - their wings actually flapped! The overall team prize was won by Team “Game/Walsh/Wade/Smith”, popular and regular entrants in many of our rides. Rear of the Ride was Lorraine Slydell and Cute Butt of the Year was Jonny Griffiths. The President’s cup for the greatest contribution by a committee member was won by Lori Poore who worked tirelessly to make both this and the C2C a success. During the year she was given particularly strong support by fellow committee members Jo Macey and Sarah Jeffries. I would also like to thank all other committee members who helped to stabilise things in what was a challenging year for this long established Hayling institution.